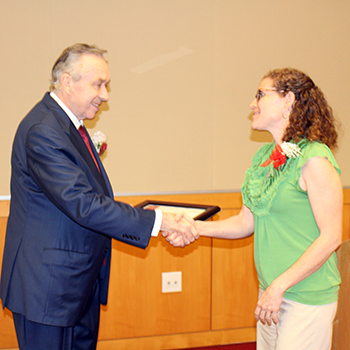 Vice Chancellor Mladen Vouk presents Nicole Wilkinson McIntosh with her certificate of nomination for the Office of Research and Innovation Awards for Excellence.

Nicole Wilkinson McIntosh, research and outreach coordinator for the state’s Water Resources Research Institute, was recently nominated for the annual Awards for Excellence in the North Carolina State University Office of Research and Innovation. Wilkinson McIntosh helps to coordinate the annual grants competition, manages WRRI’s interaction with the Urban Water Consortium and Stormwater Consortium, and coordinates a variety of workshops and an annual conference, all aimed at increasing the knowledge and research base of the state’s water resources. Her work helps transfer that research into the hands of practitioners and decision makers.

“Nicole is working extremely hard to serve the citizens of North Carolina, our region and our nation. She is an excellent ambassador for NC State’s Think and Do approach to the Land Grant Mission,” said WRRI deputy director John Fear, who nominated Wilkinson McIntosh and honored her work at the April 26 awards ceremony.

Another of Wilkinson McIntosh’s accomplishments, Fear said, was working to re-invigorate WRRI’s Urban Water Consortium (UWC) and establish the Stormwater Consortium (SWC) as an independent industry consortium at NC State. These consortia help address the needs of drinking water utilities and permitted stormwater programs in cities and towns. As with the rural water partnership, Wilkinson McIntosh worked to revive the cooperation on joint fact-finding processes that engage academic institutions, environmental and engineering consulting firms, and state agencies, to benefit all members of the consortia. 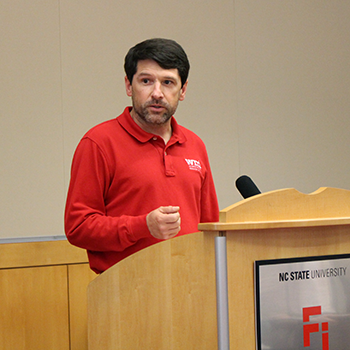 Dr. John Fear presents highlights from his nomination of Wilkinson McIntosh at the ORI Awards of Excellence Ceremony.

“These unique consortia are the envy of many of our sister Water Research Institutes across the nation,” Fear stated, “and their success is directly attributable to Nicole’s efforts.”

Wilkinson McIntosh also serves on the boards of directors for the North Carolina Water Resources Association (NCWRA) and for the Universities Council on Water Resources (UCOWR), expanding the capacity of WRRI to benefit water resources statewide and nationwide.

Perhaps her most visible accomplishment is the NC WRRI Annual Conference. Each year of her time organizing the conference, Fear said, Wilkinson McIntosh has added innovations and extra benefits, including student opportunities – such as pre-conference trainings and mentorship programs – a larger variety of session topics and engagement from additional partners. The conference has grown significantly under her leadership, and on March 21 and 22, it attracted the largest crowd of water-resource professionals, academics and students in its 21-year history, with nearly 400 attendees.

“Each year, Nicole strives to enhance the conference and make it better than the year before” Fear noted. “Keeping a recurring event like this fresh and relevant is a constant battle, but Nicole’s efforts have been truly remarkable.” Spencer Rogers receives one of the annual Awards for Excellence from Vice Chancellor Mladen Vouk. Photo by Lee Cannon.

One nominee from WRRI’s sister program, North Carolina Sea Grant, was one of two winners of the award. Spencer Rogers is the coastal construction and erosion specialist at Sea Grant and has worked for the program for over 40 years.

“All 13 nominees for the 2019 Awards for Excellence have shown they are among the university’s highest achievers,” Vice Chancellor for Research Mladen Vouk said during the awards announcement. “I thank you all for the phenomenal work you’ve done over the last year and the dedication you have shown to our university and the state of North Carolina.”

As a Sea Grant employee for more than four decades, Spencer Rogers has regularly gone above and beyond to provide scientific, research-based information to coastal property owners, government agencies, designers and building professionals — earning a statewide and national reputation as one of North Carolina’s “go-to people” for coastal construction and erosion knowledge.

Rogers’ focus on coastal safety has been a tremendous service to North Carolina residents, property owners and visitors. Of particular note are his research and outreach efforts related to rip currents and coastal construction.

“I don’t think it’s hyperbole to say that his research and outreach relating to rip current safety has and will save lives,” notes Frank Lopez, Sea Grant’s extension director. Kroeger’s current role requires working with all parts of ORI and its partnering divisions and colleges, as well as external local, regional and national collaborators. But her main focus is to provide essential administrative support to the Vice Chancellor for Research’s four advisory committees — the Research Leadership Academy (RLA), the Research Operations Council (ROC), the Research Support Council (RSC) and the University Research Committee (URC).

Kroeger got her start as the Springboard office manager, where just one of her many jobs was to serve as the always smiling face who greets each and every office visitor. She quickly became university program associate in 2017, before moving to the role of research program specialist in 2019.

Her nomination letter noted that one thing all who’ve worked with Laura seem to agree upon is that she is committed to providing customer service of the highest quality.

Reconstructing the Past to Understand Impacts on Water Quality

A WRRI–North Carolina Sea Grant-supported researcher studies decades of satellite data to see the where and how CAFOs may be impacting water quality. By Maya Hoon UPDATED: Home to many swine industries, North Carolina has…

Continue reading “Reconstructing the Past to Understand Impacts on Water Quality”