As North Carolina’s population grows and communities expand, questions of how to provide clean water and to carry off wastewater continuously challenge town and city planners.

Septic systems are a common solution for builders constructing homes and businesses in areas where municipal water infrastructure has not yet been built out. However, as impermeable surfaces — including concrete, asphalt and rooftops — proliferate, rainfall increases and hurricanes like Matthew and Florence continue to hit the state, the resulting flooding has brought a key question: Are usable water sources and wastewater flows remaining safely separated?

That is where Michael O’Driscoll, a hydrologist at East Carolina University’s (ECU) Department of Coastal Studies, picks up his story. He is researching, among other topics, how water moves from contaminant sources, such as leaking underground storage tanks and waste management devices (e.g. septic tanks), into the surrounding groundwater and surface water – such as ponds, streams, rivers and lakes. He is trying to improve our ability to detect when the groundwater will be clean and when to expect contamination.

O’Driscoll thinks he has hit upon a cost-effective way to monitor the movement of contamination from groundwater to surface waters – through groundwater seeps, which are locations where groundwater wells up and keeps the surface of the ground saturated most of the year. Seeps can serve as portholes to observe underlying groundwater quality. He recently published a paper in the Journal of Contemporary Water Research, along with fellow researchers Charles Humphrey, an environmental health expert at ECU; David DeWalle, professor emeritus of Penn State University; and Guy Iverson of ECU. 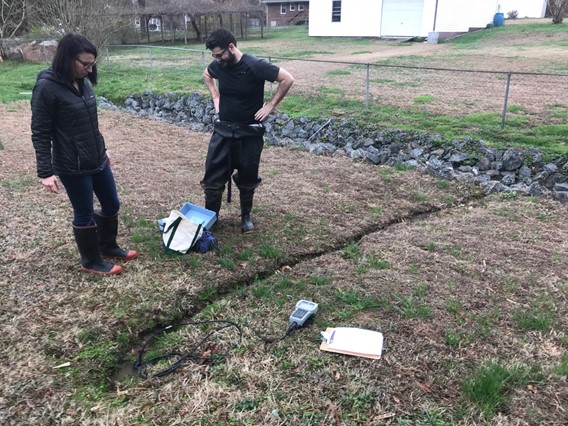 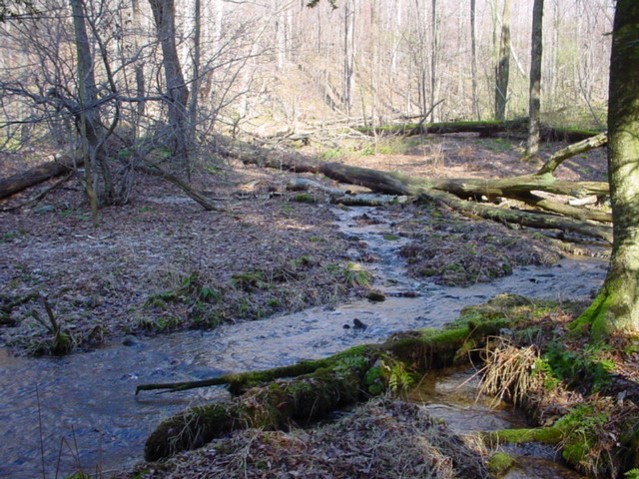 An undisturbed forested seep in an Appalachian watershed in Pennsylvania providing baseflow to the stream. 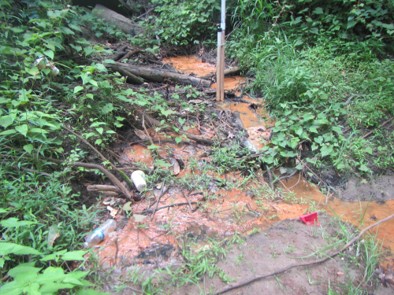 A seep along an urban stream in Greenville, NC that is affected by legacy contaminants from leaking underground (petroleum) storage tanks in downtown Greenville. Benzene and other contaminants transported by the groundwater affects stream water quality along the reach.

While searching for sources of contaminating nutrients that are moving through the ecosystem, there are plenty of culprits to chase: stormwater runoff carrying pollution, fertilizer and other chemicals washing downstream from farms and many more. For his research, O’Driscoll follows plumes of nitrates and other contaminants from subsurface sources such as on-site wastewater treatment installations, or septic systems.

“We’re doing groundwater-quality research in coastal watersheds,” O’Driscoll explains, “looking at how rivers and groundwater interact – and how those interactions can lead to nutrients going to the coast. What we’re seeing is that on-site wastewater can be a nutrient source.”

When septic systems allow wastewater from a home or other structure to spread out into surrounding soils, ideally the nutrients and contaminants are filtered out, retained by soils and vegetation, or transformed before the wastewater reaches surface water or groundwater sources. Regulations dictate how far septic systems must be placed from wells, streams, rivers and other water sources, in order to ensure adequate filtration and contaminant attenuation.

Unfortunately, O’Driscoll and other researchers have realized that sometimes the regulation distances are not long enough. Research he conducted in the North Carolina Coastal Plain, showed that contaminant plumes from septic systems can travel as far as several hundred feet.

Current regulations that septic systems must be 50-100 feet away from a water source are based on older research that concluded such a distance was ample. Newer technology and research techniques are showing the interplay between septic systems, ground and surface water, different types of soils and riparian buffers is more complex than originally thought. That means there could be hundreds or thousands of septic systems around the state that are completely in compliance, but still leaching contaminants into nearby water.

“Our Coastal Plain research showed nitrogen levels that were elevated, too close [to water sources],” O’Driscoll says. “In the sandy, coastal soils, the water table is shallow. Waste can even surface in storms sometimes.” Septic waste seeping or washing into surface water during storms has the potential to create public health hazards, when North Carolina next faces a hurricane, or even a prolonged rainfall.

The New Way to Monitor

In order to make progress on this research, however, O’Driscoll and his colleagues had to find a faster way to monitor hard-to-reach groundwater. They eventually realized that tracking seeps, places in the landscape where groundwater breaks the surface, yielded the results they needed, in less time and for a lower cost.

Often these seeps act as conduits for contaminants to rise to the surface and pollute surface water, but sometimes the seeps will actually act as a filtration mechanism.

“If the seep flow is steady,” O’Driscoll says, “it’s being fed by a longer flow path. That kind of water can take years to get to the surface, so it’s generally less affected by surface contaminants – if it’s not contaminated by surface water at its exit.” He notes that more inconsistent seeps are likely to be unfiltered water, for example rainwater flushing through the system, and therefore more likely to transport surface or near-surface contaminants.

O’Driscoll admits that hunting for sources and pathways of groundwater seeps can be daunting, but new tools are making it easier, such as GIS, geophysical techniques and updated information on land use, types of soil and more. At the NC WRRI Annual Conference in 2019, O’Driscoll, with colleagues Dave Genereux of NC State University and Geoff Gisler of the Southern Environmental Law Center, held a session to help highlight some of the legal and scientific challenges associated with groundwater contaminant transport to streams. He plans to continue his research into how seeps work and how to quantify the ecosystem services they provide.

Ultimately, O’Driscoll is interested in how a better understanding of the connections and exchanges between groundwater and surface water can improve water-resource management and policy. Work on seep water quality has gained national attention recently with cases on coal ash and wastewater pollution of seeps. Overall, he hopes this research can help provide guidance to apprise the legal and policy discussions as to how, when and where the Clean Water Act should cover polluted groundwater and help guide future research and management of seeps.

During the all-virtual 2021 NC WRRI Annual Conference, students will present lightning talks on March 25 and 26. Also on March 25, a networking session will offer career insight for students and early career professionals….